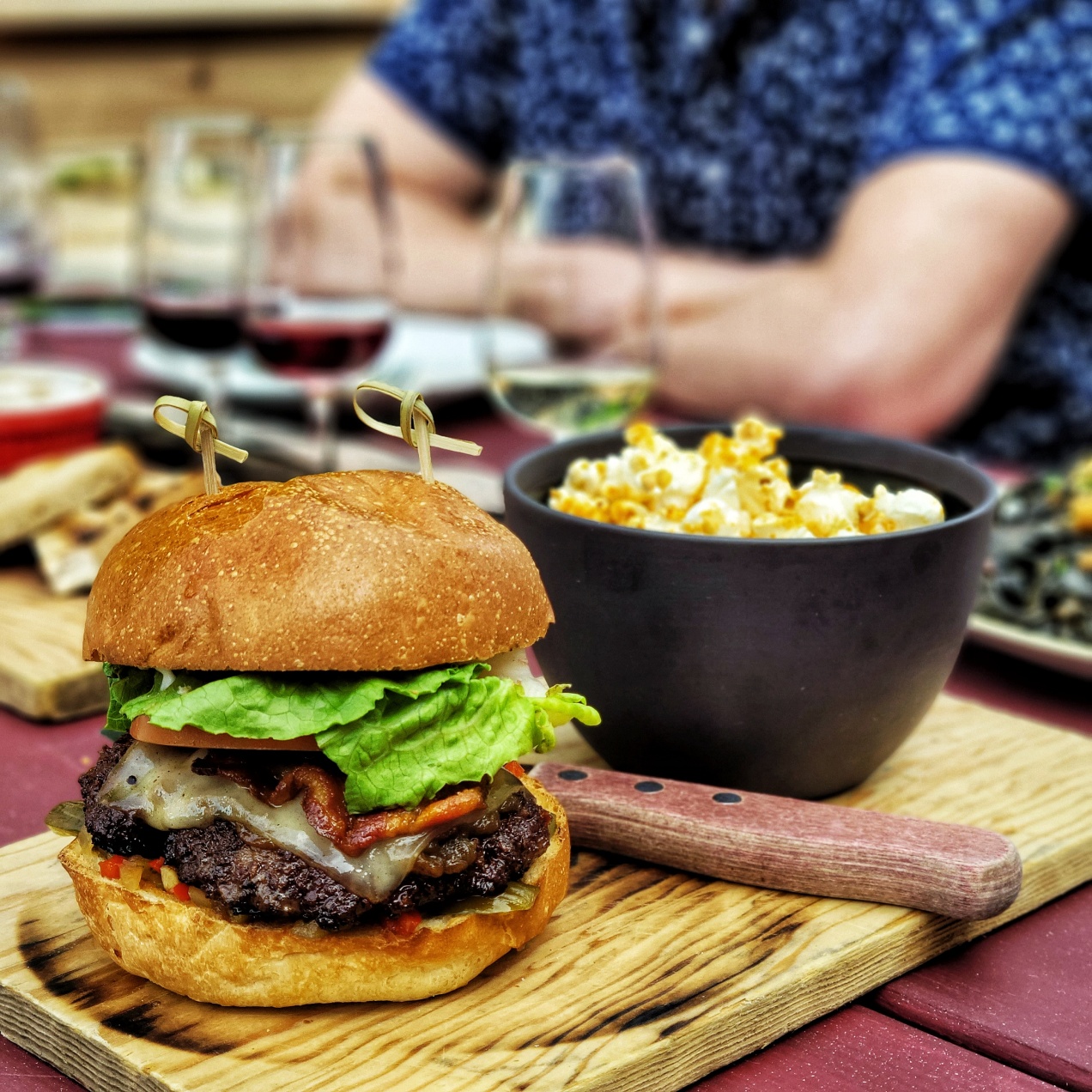 This isn’t a bona fide review because a review wouldn’t be fair to Belgard Kitchen right now. Nor, I think, would it be fair to any restaurant struggling to maintain an illusion of normalcy and full-fledged functionality at time when society at large is capable of neither. Yes, the masses are now beginning to receive their vaccinations (Kley and I were cheerfully penetrated last week) and our collective fantasy of a “Dancing in the Street”-style celebration that draws a line under this interminable pandemic has begun to feel vaguely plausible. But, I doubt I need to tell you, we still have a long road ahead of us. Few people feel this reality more acutely than restaurant owners and staff, who still are not only struggling to survive, but are simply trying to anticipate from day to day what is and isn’t possible for their industry amidst the loosening and tightening of restrictions.

Case in point: When we visited Belgard Kitchen last Friday, for happy-hour-leading-into-dinner, it was their first night of service in six weeks, and the first night ever for their new street-side patio, which seats a maximum of 48 people. We weren’t expecting perfection, nor necessarily even greatness. We simply wanted to sit under a hospitably blue late-afternoon sky and watch it dim into evening while eating and drinking and then, in all likelihood, eating and drinking some more.

We did just that. And everything was very good. In most cases, better than we expected.

Which isn’t to say we were expecting to be underwhelmed. Both of us had been to Belgard Kitchen before — although, admittedly, it was many years ago, before we knew each other and decided to make a hobby of using the internet to exhibit our mutual gluttony to strangers. Belgard Kitchen first opened in 2014, and was something of an event — the first destination restaurant to try to make a go of it on the mean streets of Railtown (still a volatile neighbourhood today, but much more so then). This was no modest venture either: Belgard is housed in an almost 8,000-square-foot industrial space, known as the Settlement Building, that began life as a steel foundry in the 1920s. It shares this space with an onsite small-batch winery (Vancouver Urban Winery) and a craft brewery (Settlement Brewery). This is the sort of environment for which real-estate marketers coined the term “soaring.”

But unless you need to pass through it on your way to the toilets, you can’t spend time in Belgard Kitchen right now. The province’s indoor-dining ban remains in effect, so be sure to place a reservation for a patio table — there are only eight of them. At the time of this writing, the patio is open for weekday lunch (11:30am-3pm), weekend brunch (10am-3pm) and daily happy hour and dinner (3pm-close). We arrived at 5pm, at which time the patio had fallen under the shadow of the Settlement Building, and a brisk wind blew down the Dunlevy corridor toward an unexpectedly moving view of shipping containers suspended above the East Vancouver port lands. Sunworshippers may not appreciate this, but myself, having been born Whitest Man on Earth and distressingly prone to burning, was as content as a suburban grandmother at Fabricland.

We adored our server, who seemed to either intuit that we were here to play or isn’t the sort to recite a memorized script of Tonight’s Offerings.

Her (following a comedic pause and a survey of the heavens): “I don’t know.”

I did very much want that cocktail, the name of which I’ve now forgotten, but I can tell you it was a variation of a Manhattan that seemed to have been liberally dosed with cacao bitters. She also brought us an excellent on-tap negroni ($11) and the Grape Expectations wine flight (a happy hour bargain at $12; $14 at other times), of which we both instantly fell in love with a 2018 Pinot Gris from Penticton’s Roche Wines. Kley’s Tasting Paddle of four featured beers ($9.50) further stoked the glow in his happy gut.

We consumed solids as well! An appropriately rich and unctuous mushroom-and-bacon pâté ($11.50 at happy hour; $15 otherwise), which prompted a request for more grilled sourdough; the justifiably self-named Belgard Burger (Cache Creek beef between a brioche bun, in the company of Swiss cheese, beer-brined pickles, and red-pepper relish — very fucking good; $17); and Fettucine Nero ($22), an attractively plated mound of squid-ink noodles mingling with a chorizo-prawn ragu, snap-snap-snappy jalapeno pesto, and herbed breadcrumbs. So much food, yet so much of the menu left unexplored.

The bill paid, we wobbled like Weebles toward home (stopping off for gelato because the weather called for it and because we have trouble stopping what we’ve started). Despite our vague gastronomic stupor, we talked — as we seem to always be doing nowadays — about the ongoing plight of restaurants and the additional burdens facing the likes of Belgard Kitchen, which has to contend with the overhead of a massive space and being slightly off the beaten path. Their patio was decently but not spectacularly busy during our visit, so we hope word spreads quickly about it now being open. Despite their enforced hiatus, they’ve hit the ground running. So run toward it.

Jewkarta was founded upon two key criterion: (1) we highlight independent Greater Vancouver restaurants; (2) we pay for our meals, and our favour can’t be bought.

Which isn’t to say we’re above being whores if an offer appeals to us, so long as we confess to having accepted it. So, when Cactus Club Cafe offered us an opportunity to try its new weekend brunch menu at the English Bay location, we replied, “Is this Saturday soon enough?”

Some people turn their noses up at Cactus, but the Vancouver-spawned “casual fine” chain achieved its multi-million-dollar success (and has repeatedly claimed Gold in the Best Chain category of the Vancouver Magazine Restaurant Awards) for a reason. From Victoria to Toronto, it always punches above its weight, delivering accessible but expertly balanced flavours and presentation with stunning consistency. (Side note: Jewkarta’s first date was at the Coal Harbour location, and our experience was good enough to nullify a somewhat disastrous post-meal first kiss.)

At first glance, Cactus’s brunch menu is surprising in its brevity and simplicity, suggesting none of the subtle but inventive flourishes for which longtime advising chef Rob Feenie is renowned: three different eggs benny (traditional, avocado, and prawn); two brunch bowls that riff on their dinner/lunch menu’s hugely popular Modern Bowl; an eggs-bacon-potatoes plate; a fried-egg sandwich; and little Belgian-style waffles. The End. (Of course, various espresso drinks and daytime-appropriate cocktails are also available.)

Fortunately, while the menu itself lacks surprises, what did surprise us was the extent to which the deliciousness of everything makes up for that. Avocado Benny ($15.75), served on good multigrain bread rather than the time-honoured English muffin, was exemplary, the eggs perfectly poached and accompanied with the most ethereal hollandaise either of us can recall having anywhere in Vancouver. The “smashed” potatoes alongside were what all diner potatoes aspire to be: crunchy exteriors yielding to tender innards, showered with enough salt that we didn’t need to reach for the shaker.

Meanwhile, the Brunch Power Bowl ($15), which sounds annoyingly virtuous (it’s vegetarian; a vegan variation is also offered), was dynamite: an artfully presented, perfectly calibrated jumble of those same poached eggs in the company of quinoa, diced avocado and roasted yam, corn, bell pepper, shredded kale, and halved grape tomatoes. The contrasting acidity of house-made salsa, chipotle aioli and pickled red onion brought everything together like the stereotypical chef’s kiss. This is a dish that is more than the sum of its parts.

Despite being so clearly inspired by nearby Café Medina they should pay royalties, the Belgian waffles ($4.50 each) were the sort of thing you find yourself craving again later in the day — hot, betraying the explosive crunch of pearl sugar, and with a sidecar of real whipped cream. Choose from one of three toppings: salted caramel, berry compote, or maple syrup ($1.25).

At the time of this writing, Cactus is offering brunch at two locations only — English Bay and Burnaby’s Station Square — but the aim is to expand to other outlets if it proves popular enough. Despite the pandemic, brunch remains a competitive sport in Vancouver for which the masses are willing to wait a long time in the rain. Cactus is a welcome new addition to the landscape — so much so that we’d happily pay with our own money next time. We may be part-time whores, but we have principles.